Nuclear activity of the inguinal and leg regions (activity count) in normal human subjects exposed to the medical Cellu M6® by LPG®.

A0.2 ml injection, tc 99m marked colloid, is performed in the foot first inter-digital space. The graphs hereafter are the lympho-scintigraphy recordings of the manoeuvres performed with the medical Cellu M6® by LPG® on the lower limb. The headset of the Cellu M6® by LPG® is applied consecutively on the leg and at the colloid point of injection. 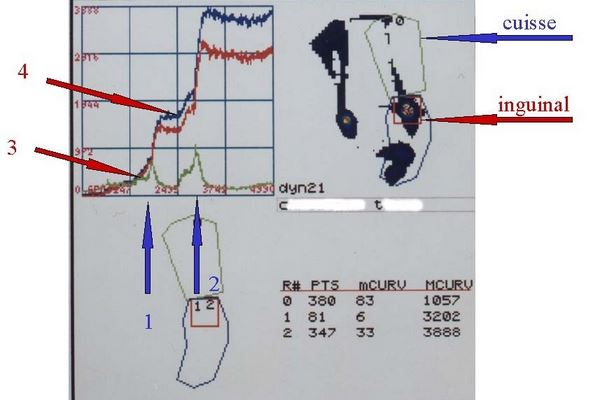 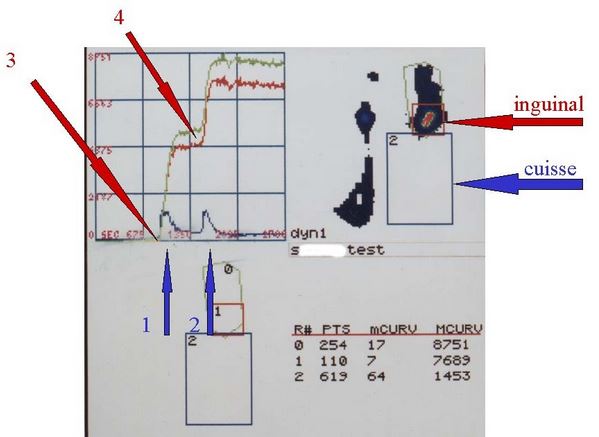 The Blue Arrow (1st peak) defines the increase of the thigh nuclear activity during the application of the Cellu M6® LPG® head set on the leg (the colloids in the greater saphenous vein are pushed into the thigh).

Note 1: Note 1: Once the manoeuvre on the leg is ended, the thigh nuclear activity returns to the pre-peak value. This is only possible because there is no lymph nodes in the nuclear activity.

The blue narrow 2 corresponds to the recording of the thigh nuclear activity after the application of the Cellu M6® LPG®at the injection site (the interstitial colloids penetrate and are pushed into the lymphatic vessels). The recording of the peak is delayed by the same amount of time the colloids take to migrate from the foot to the thigh.

The red arrow 3 corresponds to the blue arrow 1 manoeuvre but the recording is made at the level of the inguinal lymph nodes.

Note 3 : the increase in the inguinal radioactivity persists even though the application of the Cellu M6® LPG® has been ended. Indeed, the lymph node mucous membrane captured the colloid.

The red arrow 4 corresponds to the blue arrow 2 manoeuvre but the recording is made at the level of the inguinal lymph nodes.

Conclusion: With the application of the Cellu M6® de LPG® on the lower extremity an increase in the marked colloid is observed at the level of the activity count. Fodor made the same observations.